This post has a round-up of free printables available on this blog with French for teachers and parents. The free printables include word cards for my body, nocturnal animals (realistic photos and also a cartoon version), farm words, and some penguin words. At the penguin post, scroll to the bottom to find the separate French printable. For the other PDFs, print only the pages desired as the same cards have a set in English and a set in French in most cases. 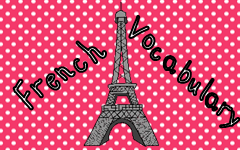 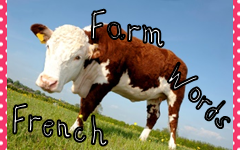 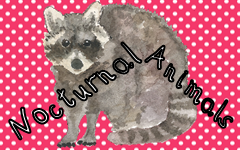 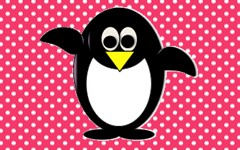 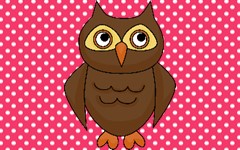 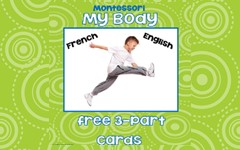 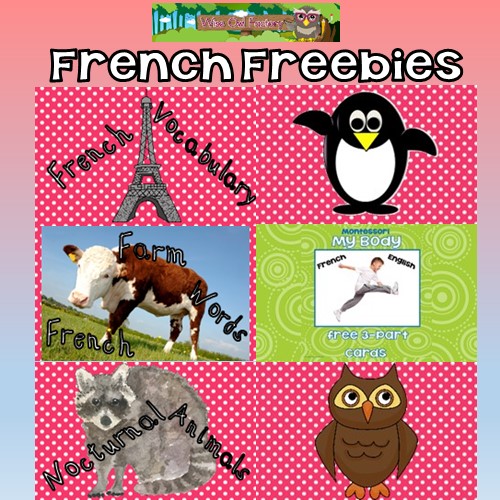 I took the only chance I ever had to go to Paris and went. Who cared the kids were toddlers and would be going with? Would they even remember the trip? Who cared! We were going to ride the Orient Express which I had for some reason until then I thought was only in movies. Our hotel was in the line of sight of the Eiffel Tower. I was going to get a chance to use my six years of French classes in real life.

We packed the Lego people in a recycled tin Band-Aid box, a doll in a backpack, a travel-sized potty chair in a suitable bag to disguise it, grabbed the suitcases and away we went. It was April. Wasn’t spring the best time to see Paris?

In a train waiting area, a couple from the United States noticed our family. The wife pointed at us and told her husband she missed her kids. “They took their kids with them traveling!” she said. Her husband rolled his eyes. Yes, we did, but we were also living in the Netherlands at the time. With no family overseas, if we wanted to go anywhere, the kids went with.  And we wanted to go places! Mr. Toddler was two, and Miss Toddler was almost four years of age at that time.

I could speak French in the Netherlands, Brussels, Antwerp, Maastricht; the Benelux countries and cities. We could drive many places and back home in a day. Didn’t everyone in Holland have lunch in Germany or Belgium once in awhile? However, since most of the citizens where we had been also spoke English, it wasn’t the immersion language experience I wished to have.

Once on the train, the picturesque French scenery flew by quickly. Once we arrived, I was the guide with no prior experience, but I managed to buy subway tickets to the hotel area and find the boarding area. We soon checked in and started exploring.

So there we were, just enjoying “being there” and hearing French. It was sunny. It was beautiful. There was the Eiffel Tower and the Parc du Chemp de Mars. The Arc de Triomphe and the Seine were real. When what to our wondering eyes should appear but dozens and dozens of paddy wagons everywhere! About 37,000 angry protesters were storming to the city to protest. 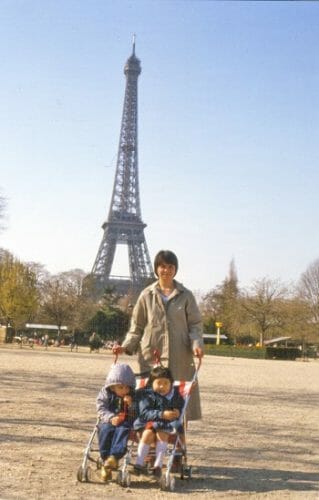 PARIS, April 13— Tens of thousands of steelworkers from the eastern province of Lorraine marched through Paris today to protest President Francois Mitterrand’s plans to reorganize the state-owned steel industry. The demonstrators, whose numbers were estimated at 30,000 to 50,000, snarled traffic throughout the city.

What was that again about spring in Paris was so wonderful? My husband started taking photos as if it was going to be a parade when someone who spoke English explained we needed to get out of there and fast. Our hotel was just across the street; surely it would be easy to get back. Oh, no, the road was suddenly blocked and off limits. It was a long walk around all the then blocked off streets to return to safety. Miss Toddler named the experience, “The Damaration.” The term stuck and we still refer to it as such.

Before this trip, I had never seen a fully automatic and self-cleaning public restroom. Just put in some French coins and it totally cleaned itself by spraying soap and I suppose chemicals from the ceiling to the floor.  The door then opened by a timer or something, ready for the next person. What was a mom to do? Once, I put the potty chair in and turned the whole thing on just to see if it could wash the tiny chair. It did! However, it wasn’t necessary, Mr. Toddler didn’t need it after all.

It really took me all three days just to have the language start to come alive for me, but I was able to hear real French while being in Paris. I was able to order food in restaurants, and even managed to get a strawberry ice cream cone for Miss Toddler from a street vendor. To my horror, I could hear my own French spoken with a Dutch accent. My odd accent also puzzled just a few cashiers and waiters. Well, we mostly managed. However, we somehow left the Lego people in a café, which was about the only thing Mr. Toddler ever remembered about the trip.

The odd thing about learning languages before age ten is that later a person is more able to later learn a foreign language. Actual words are not remembered, but the ability to learn a second language later is enhanced.  Our daughter was a high school foreign exchange student to Germany twice, minored in German, and took business trips there for Honeywell. Did it the many hours of German Sesame Street we saw in the Netherlands somehow help her? Our son’s college class traveled to some European countries including France one summer. His foreign language of choice is French. Our children really don’t remember the 1984 trip, of course, but somewhere in their brains the ability to learn a different language was enhanced.  And, no, we were not invited to ride in any paddy wagons! 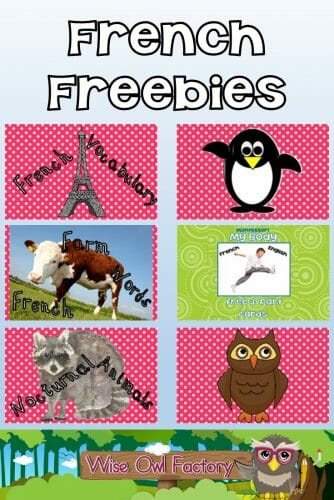